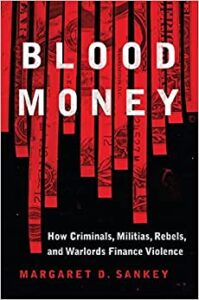 Imagine you’re watching the news. The first item concerns “separatists” in some region of the world perpetrating at terror attack. The second item is about a British banker convicted of money laundering. The third item tells of a massive ransomware attack that netted millions for some anonymous hacker. You could be forgiven for not realizing that these are all, in fact, part of a single scheme. The news doesn’t know it. Policy makers barely know it, or if they do, they haven’t figured out a way to deal with it.

Understanding the connections between criminal enterprises and violent non-state actors (VNSAs) is the purpose of a new book, Blood Money – How Criminals, Militias, Rebels and Warlords Finance Violence, by Professor Margaret Sankey of the Air Force War College. With extensive research and case examples, Sankey lays out the byzantine, interlocking worlds of terrorism, criminal organizations, militias and their (un)willing partners in the “legitimate” spheres of banking and global corporate operations.

The book contains a number of fascinating revelations, starting with the fallacy that terror attacks and other forms of “asymmetrical warfare” are cheap for the attacker. While yes, an explosive vest might cost a thousand dollars, the organization that planned the attack and recruited the suicide bomber may actually need tens of millions of dollars a year to operate. Sankey lays out the political and bureaucratic realities of running an international terror group. They have personnel departments, accountants, media arms and so forth. These are big budget operations, and the money has to come from somewhere.

The money comes mostly from criminal activities, according to Sankey. As she explains, affinities between criminal groups and VSNAs—for example between Hezbollah and Lebanese expat criminals around the world—create the fundraising synergies required to keep the VSNA in operation.

This synergy comes with a host of problems for everyone involved. The VSNA may want notoriety. Indeed, its operations may be driven by a desire for global media attention. That’s exactly what a criminal group doesn’t want. They would prefer to operate in the shadows.

The book dedicates chapters to the major areas of criminal-VNSA collaboration. These include fraud rings, smuggling and counterfeiting. Anywhere there can be arbitrage of commodities or goods, there is the opportunity for this kind of activity. For example, manufacturing fake versions of popular consumer products and smuggling them into the US or EU provide opportunities for profit that can fund VNSA projects. Domestic cigarette smuggling to evade taxes is another example she provides.

Sankey also delves into the murky crossover zone that connects the licit and illicit economies. She discusses the problems of “deviant globalization,” wherein the commercial and communication networks that exist to exploit cheap labor and resources in the third world are harnessed to deliver money and stolen goods to the West.

The book also explores some of the weaknesses in the prosecution of these entities. One of the biggest issues, as she explains, is the “silo” approach taken by law enforcement and policy bodies. Terrorism is one category of enforcement. Crime is another. They should ideally be pursued jointly, or at least in a more integrated process.

Another factor limiting effective policy is a tendency for policy makers to view the “Westphalian State,” a term Sankey likes to use, as the primary means of combatting VSNAs. This might be precisely wrong, as the established state, the one with the UN ambassador and the US State Department on speed dial, may in fact be the weakest entity in the entire landscape. The VNSA itself may hold a lot more sway in certain parts of the world.

This book is a useful resource for anyone who wants to mitigate the threats of terrorism, crime and cyberattacks. It offers a roadmap to understanding why and how these assaults on the major Western economies are actually occurring. If policy makers had a better understanding of the issues involved, they might be able to come up with better ideas for solving the problem.