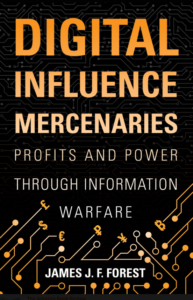 Digital Influence Mercenaries: Profits and Power Through Information Warfare by James J. F. Forest  (Naval Institute Press) is part of an unintended trilogy of recent books that attempt to explain the current credibility crisis in news and public opinion. Together with Bombarded and Social Engineering, Digital Influence Mercenaries explores the world of stealthy entities that drive online disinformation campaigns.

The book seeks to answer the questions that are on the lips of so many concerned observers: What on earth is happening in the public sphere? How are tens of millions of people persuaded to believe demonstrably false stories—often with serious real-world implications?

How can it be that 70% of Republicans believe that Donald Trump won the 2020 election when 62 lawsuits making this claim have been thrown out of court and news outlets have revealed that the main architects of the “stop the steal” story privately admitted that they knew they were lying? (This is my example, not Forest’s.) It seems the very definition of reality itself is up for grabs these days, and the outlook for the truth is not looking so hot.

Forest, a professor at the University of Massachusetts, offers an answer. He lays out a compelling, detailed analysis of the murky world of disinformation for profit. As he explains, there is an entire industry of firms and individuals who are available to manipulate public opinion online. As warfare becomes more digital, mercenary armies are at the ready. They engage in deception and dirty tricks for money. In some cases, they are entrepreneurial businesses that invent outrageous fake stories and sell ads on sites that draw millions of page views.

As warfare becomes more digital, mercenary armies are at the ready.

Other times, they are hired and paid to achieve specific opinion goals, like convincing people that the Pope had endorsed Donald Trump for president, a notoriously successful fake story in 2016.  Forest helpfully frames the issue in terms of the “attention economy,” an economic theory that links the ability to get attention with the ability to make money and gain political power. In his view, the supply and demand nature of the attention economy has created a market for firms and entrepreneurs using the tactics, tools and strategies of digital influence warfare to gain profit and power.

Digital influence mercenaries are not only involved in politics. They are available to help with corporate messaging initiatives and international relations.

Forest also broadens his focus to let the reader know that digital influence mercenaries are not only involved in politics. They are available to help with corporate messaging initiatives and international relations. Clients can include governments, private citizens (e.g., billionaires) and intelligence agencies. Indeed, as he points out, this is not a solely American phenomenon. Numerous countries are going through their own experiences of well-honed digital lies erupting into real crises.

The digital influence mercenary, according to Forest, often develops his or her messaging based on an analysis of the audience. False stories and conspiracy theories are carefully constructed to speak to the fears and suspicions of a target group. Social Engineering also digs into this topic. Both books reveal how in-depth data analytics, often performed on illegally or improperly obtained data sets, drive strikingly successful results in terms of disinformation influence.

The book begs a question: Why do people fall for this stuff?

The book begs a question: Why do people fall for this stuff? It’s one thing to gin up a story that says Hilary Clinton is a shoplifter. It’s another thing for that story to be reshared a hundred million times. The answer, which Forest doesn’t delve too deeply into, is that we all seem to have a great appetite for fake stories that confirm our pre-existing beliefs and tribal inclinations. He does point out, however, that those on the political right are more likely to believe and share false stories. Research reveals that people on the left tend to get their information from multiple sources, so they are less inclined to buy into patent falsity.

None of this is new, of course. The use of lies to manipulate public opinion has been around for centuries. It’s possible that we’re simply going through the inevitable cycle of political disruption that occurs during a media technology revolution. The invention of the printing press led to the Reformation. The invention of radio aided the rise of fascism. The invention of television shook up American politics and ended the era of the party bosses, and so forth. The dawn of the Internet and social media era is now creating a fake new microcosm that disrupts all established purveyors of actual news.

There is a feeling that perhaps this time it really is different.

At the same time, there is a feeling that perhaps this time it really is different. The power of mass, instant connectivity and social networks seems to be producing a force in public life that none of us could have imagined. Nor does anyone have any particularly bright ideas about what to do about the problem.

Forest does believe that there are solutions. He believes that social media platforms can do more to screen out bots and malicious fake stories. He credits them with efforts made to date, though. He cites a number of examples of social media companies taking the initiative to improve the quality of information on their platforms. Much work remains to be done, however.