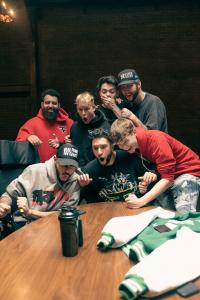 Today FaZe Clan announced a groundbreaking collaboration with Microsoft’s Xbox alongside a 3D animated content piece featuring a digital rendering of FaZe Clan’s first New York house and paying tribute to the role Xbox 360 had in the organization’s formative years; watch HERE. The collection – which drops on the organization’s 11-year anniversary, May 30th aka “FaZe Day” – is especially nostalgic and meaningful for the original members of FaZe Clan who met back in 2010 while playing on Xbox Live. FaZe Banks, Apex, Temperrr, Rain, Adapt, Blaze and Teeqo filmed an incredibly intimate, heartfelt and of course, hilarious roundtable discussion last week to recount their memories growing up on Xbox together, how they met and how far they’ve come since then. The special content piece in support of the collaboration will arrive later this week on FaZe Clan’s YouTube channel.

The Xbox 360 console catapulted online gaming into the mainstream, making it possible for friends to game together without being in the same room to play; they didn’t even have to be in the same country. Xbox Live connected people around the globe and made it possible for someone like FaZe Teeqo in Sweden to game with FaZe Temperrr or FaZe Banks in the United States, which is what unintentionally kickstarted FaZe Clan’s global presence. The Xbox 360, Xbox Live and FaZe Clan’s growing presence in the gaming community helped shape gaming culture into what it is today, a form of social currency that has become paramount in the midst of a global pandemic.

This collaboration marks the first time FaZe Clan has partnered with Xbox and celebrates the impact Xbox 360 and Xbox Live has had not only on FaZe Clan but the gaming community as a whole. Each design was inspired by real experiences from FaZe Clan’s humble beginnings and pays homage to how far FaZe has come: starting as kids playing on Xbox Live to a global organization with a passionate fan base of over 350 million.

“It’s a dream come true for FaZe to be teaming up with Xbox,” says FaZe Banks. “This collaboration is extremely special to us because it brings us back to our roots and celebrates how far we’ve come from just being kids who love playing video games to a massive global organization. We are stoked to share this with our incredible fans who have been with us since the beginning. Happy 11th birthday to FaZe fam!!”

The extremely limited-edition collection, which includes items such as t-shirts, hoodie, varsity jacket + more, ranges from $36-$160 and will be available on May 30 at 12pm PT on fazeclan.com.

Since its inception in 2010, FaZe Clan has established itself as the world’s most prominent and influential gaming organization known for its disruptive original content and hyper-engaged global fanbase of over 350 million combined across all social platforms. FaZe Clan holds an unrivaled position at the epicenter of gaming, sports, culture and entertainment, driving how the next generation consumes content, plays and shops. Their roster of 85 influential personalities consists of world-class gamers, engaging content creators and a mix of talent beyond the world of gaming, including NBA star Ben Simmons, Lebron “Bronny” James Jr and Lil Yachty. The organization’s unmatched esports division includes ten competitive teams in Fortnite, FIFA, PUBG, PUBG Mobile, Rainbow Six, Call of Duty League (Atlanta FaZe), VALORANT, Rocket League and CS:GO with dozens of world championship trophies among them. In addition, FaZe Clan has become a sought-after fashion and lifestyle brand through an inspired apparel line and limited-edition collaborations with partners including Champion, NFL, Manchester City FC, Lyrical Lemonade, Kappa, CLOT, LA Kings, and more. Follow us @FaZeClan, @FaZeApparel and @FaZeUpdate.