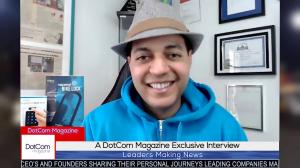 Robbie Cabral, Distinguished Entrepreneur and Inventor, and Founder and CEO of BenjiLock joins other leaders, trailblazers, and thought leaders being Interviewed for the popular DotCom Magazine Entrepreneur Video Spotlight Series. After being laid off from work and extremely overweight, Robbie Cabral woke up one day and decided to do better, not only for himself but also for his family, so he started going to the gym. He noticed how people were using their lockers on a daily basis and the issues they were constantly having. From forgetting their combinations, leaving their keys inside to having to bolt-cut the locks, Robbie wanted to find a solution to their problems and that’s where BenjiLock was born. After years of fine-tuning his prototype, he decided to unveil it to the world in 2017 as a first-time exhibitor at the biggest consumer electronics show in America,

Robbie’s passion made him create an electrifying // Eureka // moment at the Consumer Electronics Show. Not only did BenjiLock get discovered by major retailers, such as ACE Hardware and The Grommet, but it also won Innovation Awards honorees. This also helped him land a casting call on ABC’s Shark Tank , which he ultimately pitched to the Sharks and secured a bite from Kevin O’Leary aka Mr. Wonderful. The journey for BenjiLock was just getting started! The leading security and hardware innovator Hampton Products International, the makers of BRINKS locks, noticed the excitement about the brand at CES and the award-winning hybrid patented technology around it. In less than a year, due to these secured thrilling partnerships, BenjiLock has become a reality, securing distribution and manufacturing with some of the biggest names in the industry, including ACE Hardware, Walmart, Home Depot, QVC, Lowe’s and much more. The company keeps winning exciting awards for innovation, design, and creativity, making BenjiLock the trendsetter lock for this generation. Kim Kelley, President, and CEO went on CNBC’s Halftime Report and gave Robbie the opportunity of a lifetime.

Robbie Cabral has been Zoom Interviewed by the leader in entrepreneur interviews, Mr. Andy “Jake” Jacob, CEO of DotCom Magazine for the Online Magazine’s Entrepreneur Spotlight Video Interview Series. Robbie Cabral joins other leaders selected by the editorial team of DotCom Magazine be interviewed on compelling video series. Robbie Cabral discusses the newest offerings of BenjiLock, what makes the company different than other firms, and shares admirable thoughts on leadership and entrepreneurship. Robbie Cabral joins other leaders building strong and compelling companies that have been invited to participate in the exclusive video series.

Andy Jacob, CEO of DotCom Magazine says, “The interview with Shark Tank Deal Maker Robbie Cabral was fantastic. He has an incredible story. The success of BenjiLock is a true testament to their team and their people. It was a real honor to have Robbie Cabral on the video series. Interviewing Robbie Cabral was a lot of fun, educational and wondrous. It was superb to have Robbie Cabral on the show, and I know people will be absolutely be motivated and intrigued by what he has to say. I love the fact that he is paying it forward, just like Kevin O’Leary aka Mr. Wonderful, told him to do!”

Andy Jacob continues, “It is the goal of DotCom Magazine to provide the absolute best in what entrepreneurship has to offer. We have interviewed many of the leading entrepreneurs in their respective field, and Robbie Cabral of BenjiLock has a remarkably interesting story. We were incredibly delighted to have Robbie Cabral on the show as it takes amazing leadership to build a company like BenjiLock. There are so many powerful and talented entrepreneurs throughout the world. I am extremely fortunate to interview the best of the best, and I always come away humbled by how many energetic and talented people are building amazing companies. Robbie Cabral and BenjiLock are providing a cutting edge product to their clients, and they have leveraged their team’s background and experience to build an outstanding company. As we scout the world for impressive entrepreneurs and companies, it is always a wonderful experience for to meet leaders like Robbie Cabral who are forging an incredible path for others. At DotCom Magazine, we believe entrepreneurs are the heartbeat of the world. We believe it is a world where risk takers must be lauded, saluted, and respected. Outstanding entrepreneurs know that nothing is given to them. Successful entrepreneurs get up every morning and give an amazing effort. We salute the leaders of this world like Shark Tank Deal Maker Robbie Cabral”.