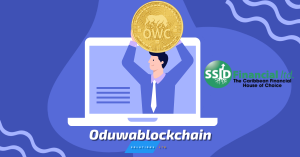 Money is not the problem. It is what you do with it.”
— Bright Enabulele

This milestone brings blockchain technology to the forefront for indigenous people of African descent in that region who need it the most.
This aligns with one of the founding principles of Oduwacoin.

This partnership reaffirms the spirit of ubuntu, that there is wealth creation in unity. We are happy to present the benefits of having an alternative payment system powered by blockchain technology and the possible intrinsic value Oduwacoin can offer the people.

However, it is also great to know that this is the second major financial institution offering Oduwacoin O.T.C.
Najah Roberts, the chief officer of www.cryptoblockchainplug.com located in Inglewood-California, ignited the first O.T.C with Oduwacoin and is now launching the Black Wall Street Tour alongside Celebrity Actor and Financial Literacy Author Hill Harper. Oduwacoin is in talks to be listed on Theblackwallstreet.com wallet later this year.

Indigenous communities and people of African descent are beginning to understand that Oduwacoin represents their interest in the digital economy, and they are positioning themselves for the opportunity

The creators of Oduwacoin are happy to see their vision become a blockchain solution to indigenous communities suffering from financial inclusion and disempowerment.

Here is how you join Oduwacoin Network; go to www.oduwacoin.io/
Contact the OTC vendors above and buy your Oduwacoin now.