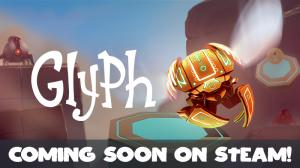 3D platformer “Glyph” has received a lot of praise. It’s now possible to sign-up for a free demo run on Steam.

Danish Bolverk Games is making a big bet on their recommended 3D platformer, Glyph, as it floats a Coming Soon page on the popular PC platform, STEAM.

With smooth, stable gameplay, Glyph is truly a joy to play.
”
— Nintendo Life

It’s an attractive page with lots of possible actions on it already. Gamers are already able to sign up for a fun&free three-level demo, wishlist the game while sideglancing the new gameplay video.

In the game’s build process, the platform game has been subjected to thorough programming and bug squashing, not always found in indie game productions. As a result, reviewers describe playing Glyph as a Zen-like state when you explore tranquil deserts, solve puzzles, bounce, and fly while in complete control. There is plenty of time to be collecting and sniffing around for secret rewards and levels within levels.

The game is versatile since players can also enter into harrowing time-trial levels, competing against the clock to collect rewards and advance skills. Those skills are needed in the late game to avoid and defeat enemies in the main character’s quest to restore the ancient Temple City.

Most video game players will find this interesting if into the platform genre. It’s so well made; it isn’t just for the typical indie game enthusiast.

Fans find the game to have “almost endless possibilities” with the ability to do “incredible feats of platforming that couldn’t really be done in most other 3D platformers.”

First released to Nintendo Switch earlier this year, the game was soon elected Game Of The Day on Nintendo’s eStore and also received the accolade of Game of The Month from reviewers. Bolverk launched the game on the Switch console due to Nintendo’s long history with platform games. Now, the time has come to make the game available to PC gamers. Linux, Xbox, and Playstation owners will also be able to buy the game in the future.

Glyph is atmospheric. It’s captivating. It’s easy to learn and satisfying to master. When players reach the top of the learning curve, the large world becomes a playground to soar through, glide above, or thrust past with powerful momentum.

If you want to learn more about the game or the Coming Soon page, wishlist the game, or sign-p for exclusive access to the coming demo, check out the games STEAM page.

Bolverk Games is a self-supporting indie studio based in Denmark and focused on VR games and software. Bolverk was among the first to realize how VR gaming could be more than a novelty and are still at the forefront of a growing market, exploring VR’s potential. However, over the past year, they have been working on the 3D platform game for the Nintendo Switch console, Glyph.

Glyph is a colorful and atmospheric 3D platformer game. You play as a sphere-shaped mechanical scarab, named Glyph, from a third-person perspective. The player has to practice precision, speed, and ingenuity to collect relics and artifacts while exploring a series of highly varied, charming, and treacherous non-linear levels.

The end goal is to complete all the levels and restore the ancient temple city residing in the desert, which also functions as the game´s non-linear hub world.

Glyph appeals to both chill-out players and speedrunners as the open world allows for creative ways to move through the 80+ levels available with the release.