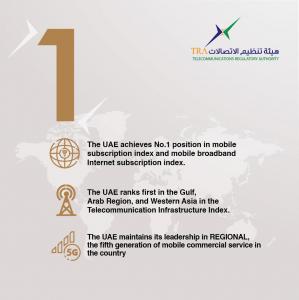 “The year 2020 was exceptional at all levels and full of unexpected development and never-before challenges.”
— His Excellency Hamad Obaid Al Mansoori

DUBAI, UNITED ARAB EMIRATES, March 11, 2021 /EINPresswire.com/ — • The UAE ranks first in the Gulf, Arab Region, and Western Asia, and seventh globally in the Telecommunication Infrastructure Index.
• The UAE achieves No.1 position in mobile subscription index and mobile broadband Internet subscription index.
• The UAE maintains its leadership in 5G, the fifth generation of mobile commercial service in the country.

(Arab Newswire) According to The Telecommunications and Digital Government Regulatory Authority ‘s report, the year 2020 witnessed a noticeable increase in the demand for telecommunications and Internet services. This growth is also a reflection of the sector’s readiness and the Authority’s resolve to move towards the future, by deploying all modern technologies in the best way possible to realize greater achievements at local, regional and even global levels.

According to the UN E-Government Survey 2020, the UAE’s telecommunications infrastructure ranks first in the Gulf, Arab Region and Western Asia, and seventh globally in the Telecommunications Infrastructure Index. In the Smart Services Index, the UAE ranks first in the Gulf, the Arab Region and West Asia, and the eighth in the world.

The survey confirmed the UAE’s determination to provide services that meet the people’s needs and aspirations by employing emerging and advanced technologies and implementing digital transformation programs like Smart Dubai, Blockchain and Artificial Intelligence Strategy; that was in line with the wise leadership’s directives to engage the various segments by providing easy and interactive services that enhance society’s happiness.

During 2020, the UAE maintained its first place globally in mobile phone subscriptions index and advanced from second place to first in the world in mobile broadband Internet subscriptions index. The UAE also ranked first in the Arab world and at the regional level in the Information & communication technologies Index, the Internet Access Index, and the Internet Use Index.
In terms of the overall percentage of Internet users, the UAE made progress by reaching the fifth position globally and a qualitative leap from the 68th place in the world to the 29th position in the fixed broadband subscriptions index. It is worth noting that the UAE ranked first in the Arab Region in the index of local Internet domain names, which uses the symbol (ae). These indicators measure the percentage of domain registration in other countries and indicate movement volume and technological interaction.

When it came to the launch and use of 5G – the fifth-generation network, the UAE ranked first in the Arab Region and fourth globally, according to the Global Connectivity Index issued by Carphone Warehouse, specialized in technology benchmarking.
An added achievement, the UAE came first in the Middle East for transformation to Internet Protocol version 6 (IPv6), according to statistics issued by Ripe NCC, Akamai Technologies, and Google. The transition to IPv6 helped Internet service providers deliver better services and significantly impacted implementing 5G technologies for mobile phone networks and digital transformation. The IPv6 was critical due to the shortage of Internet protocols and the inability of IPv4 to meet the growing demand in light of the internet’s rapid growth.

In the ODIN report issued by the Open Data Watch, which included 187 countries, the UAE ranked 16th globally, leaping 51 places at once, compared to 2018. In this indicator, the UAE outperformed countries such as the USA, Korea, Switzerland, France, Spain, Japan, and the United Kingdom. According to the report, two main factors – openness and comprehensive coverage, classified the countries for open data sites.

His Excellency Hamad Obaid Al Mansoori, Director General of the Telecommunications and Digital Government Regulatory Authority, said, “The year 2020 was exceptional at all levels and full of unexpected development and never-before challenges. There was an increased need for internet services from lockdown in most countries and the almost total suspension of transport movement to reliance on the internet to accomplish business, education, communication, and government services. This increased demand added pressure on networks, which required the most modern infrastructure and technologies to deal with this sudden development. The UAE affirmed its leadership in all sectors, especially in communication technology as the The Telecommunications and Digital Government Regulatory Authority confirmed its ability to achieve distinguished results. Indeed it is a proud moment of strategic thinking and continuous development under the guidance of our wise leadership.”

He added: “We were able to meet the nation’s growing needs during the last year and exceed expectations with the readiness of the Telecommunications and Digital Government Regulatory Authority in its pursuit of excellence, which helped to achieve impressive results at local, regional and global levels. We consider these achievements a catalyst for achieving more positive results and will help us continue efforts to reaffirm the United Arab Emirates position in the world”.

“The United Arab Emirates is one of the leading countries in the region in the field of digital transformation. It is supported by qualified national human resources who are open to international best practices. The UAE’s teams have always been keen to develop their skills and enhance their online presence; they develop their strategies to keep pace with the developments and prepare for the future. It is for these reasons, that the UAE achieves distinguished results every year,” said Richard Kerby, President, Richard Kerby LLC and an expert advisor of international repute on digital transformation of governments.

– END –
About The Telecommunications and Digital Government Regulatory Authority: