Home » Uncategorized » RemoteRated: How a Prototype on SquareSpace Became a #1 Product on ProductHunt 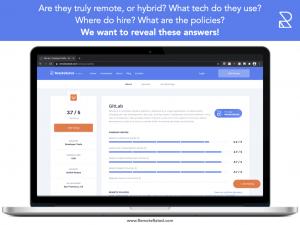 RemoteRated started as a simple SquareSpace website, but when it started catching interest from around the world, this team decided to build something bigger!

SAN FRANCISCO, CALIFORNIA, UNITED STATES, March 9, 2021 /EINPresswire.com/ — In May of 2020, in the midst of the pandemic and the first big wave of nationwide lockdowns, dozens of companies from Twitter to Zillow were announcing their newly remote status. Despite how important this real-time transformation was to so many people, there were few sources of consistent information; who was now remote? Which companies had taken the steps to keep their employees safe at home with no expiration date?

To address this, Maxim Wheatley decided to build a quick website to list the companies that were announcing their newly remote status, an hour or two of tinkering on SquareSpace yielded a simple listing of companies: AreTheyRemoteYet.com. Within hours of publishing, people from across the country and around the world started reaching out to share new companies and ask questions. Clearly there was an appetite to understand who was now remote!

Fast forward a few months, and the Merico team had an idea: why not expand on this and make a place for people to not only see which companies are remote, but how good they are at running remotely. Many websites had remote jobs, Glassdoor.com had company ratings, but nobody was focused on showing which companies were best at remote, or why. This idea became RemoteRated.com

Built by a team spanning four different countries, and three different languages, RemoteRated was created in just a few short months to provide transparent insight to remote workers around the world. Yesterday RemoteRated.com was launched on ProductHunt.com to great enthusiasm, finishing as the #1 ranked product of the day.

RemoteRated and the Merico team are now on a mission to create the most valuable and transparent source of information for remote companies to celebrate their successes, while empowering job-seekers with user-generated information to show which companies are the best for building a rewarding career in the evolving virtual workplace!

Merico is a leading code analytics startup backed by renowned investors GGV Capital and OSS Capital. Merico empowers developers around the world with practical insights on performance and contribution value. Founded by Jinglei Ren, Roland Vogl, and Hezheng Yin and based in California, the Merico team are always working on bringing the future of work to life with their technology and products. Merico and RemoteRated are led in the U.S. by Maxim Wheatley, Head of Americas bringing a decade of remote leadership and product experience to the team.

Previous: Wimgo announces Video Explainers as one of the top 2D animators’ companies
Next: The 12 most important technology partnerships in Connected & Automated Driving in 2020