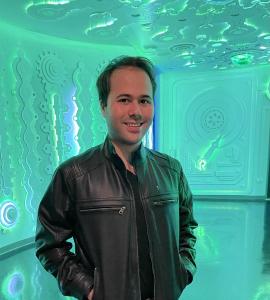 NFTs popularity is exploding. Now Magic is on the blockchain.

There are so many applications for NFT technology. I want to encourage all artists to explore this space. Magicians are the most creative group of artists I know of.”
— Magician Giancarlo Bernini

Bernini’s NFT Makes History as the First Magic Trick on the Blockchain[Dateline], March 5, 2020 – On February 24, 2021 America’s most innovative young magician ‘minted’ the first ever Magic Trick NFT on the Ethereum Blockchain.

Giancarlo Bernini, a magician who is known to bring philosophy, theology, and community to the magic world, has now incorporated the world’s hottest technology into the Magic ecosystem.

Bernini, represented by entertainment Attorney Ray Genco, stated, “There are so many applications for this technology. I want to encourage the most creative community I know, magicians, to explore this space.”

Bernini goes on to explain, “NFTs are a tool that can allow us all to engage with our fans and our community in deeper and imaginative ways. I minted the first magic trick to the blockchain. This trick called “The Time Box” – it’s one of the earliest tricks I invented. To store magic tricks and their Methods, I implemented a 2 Token system.”

“One NFT is the Effect token, it describes in detail the trick as perceived by the audience. Some are available to be purchased and some have been given away. The second Token is a Method Token, there are only four of these in existence. These tokens are minted to the blockchain and stored securely in secret crypto wallet, which the magician controls. In the future, I can share them with young magicians, I can release them to the public, or I can keep the content hidden. We have brought to life some of the most beautiful and respected traditions of our art.” Bernini stores the 12 word passcode and the wallet’s unique digital ID code (needed for access to the digital wallet) in a safe at an undisclosed location.

The public can own a piece of history, by purchasing one of the limited Effect tokens on the Rarible NFT marketplace.

NFTs are wildly popular in the art community with a vibrant secondary market continuing to grow each day. Congress does not currently recognize Magic as a national art. Bernini hopes his actions may help to change that, “Magicians are artists, Magic is art. Magic is transformative. Magicians build community, painstakingly work at their craft, perform, collaborate, innovate, and inspire. We do all of that in the universal language of wonder, which overcomes any barriers of age, religion, race, and education. I see it the same as a master’s painting or a moving concerto.”

Mark Cuban has made statements on the NFT industry: In addition to collectibles, Cuban predicts that NFTs will disrupt the music and movie industries.

“I think the collectible side of it is going to completely turn the [art], music and movie industry upside down,” Cuban said.

“I’d be going to every musician I know right now. I’d introduce myself, like I did back in the day with Broadcast.com, [to make] anything digital. Same with movies.”

Cuban further to CNBC “Gen Z value digital goods more than anything, other than maybe a house, maybe a car [and] their phone. After that, it’s digital. They’re going to respect something that’s digital before they buy something that’s physical.”