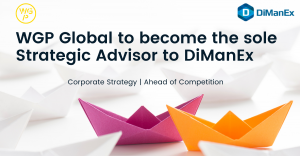 WGP Global and DiManEx announce that they have formalised an agreement for WGP Global to become the sole Strategic Advisor to the Dutch company.

We couldn’t be happier that DiManEx have appointed WGP Global as their sole strategic advisors.”
— David Orchard, President and Co-Founder, WGP Global

LONDON, CENTRAL, ENGLAND, February 27, 2021 /EINPresswire.com/ — WGP Global and DiManEx announced today that they have formalised an agreement for WGP Global to become the sole Strategic Advisor to the Dutch company.

Headquartered in Utrecht, DiManEx is a world leader in the integration of digital manufacturing technologies, in particular 3D printing, in global supply chains workflow.

“We are thrilled to be able to appoint WGP Global as our sole Strategic Advisors. Their expert advice on all aspects of corporate strategy will ensure that we stay ahead of the competition,” DiManEx CEO, Tibor van Melsem Kocsis, noted.

“DiManEx offers an end-to-end platform that leverages sophisticated machine learning to help identify the right parts for on-demand manufacturing, using supply chain and technical data. The platform integrates with your workflow and helps you avoid hardware and tooling investments. We support the part design, conversion and quality control process, so you can collaborate with colleagues across departments. Once your design is approved, our platform automatically matches your order with the Additive Manufacturing partner that best matches your material specifications and needs. The end result? A part delivered where and when you need it. Hassle-free.”

President and co-founder of WGP Global, specialists in all aspects of business, law and finance, David Orchard, said: “We couldn’t be happier that DiManEx have appointed WGP Global as their sole strategic advisors. As part of our service, we will be working alongside Tibor and his team to offer them specific tailored advice, a robust marketing strategy and insight which will ensure that DiManEx are in the safest hands.

“It is, and has always been, WGP Global’s intention to build upon our success and deliver consistent results for our clients.”

WGP Global was conceived in 2009 to combine the founders’ expertise, experience and networks to create what has grown into the WGP Global of today; a multi-generational practice built on traditional values and integrity, complemented by a progressive, modern approach to doing business in a borderless world.

The company is represented by a team of Legal, Compliance and Regulatory experts, captains of industry, diplomats, academics and thought-leaders in geopolitics & international affairs across many industries and specialisms.