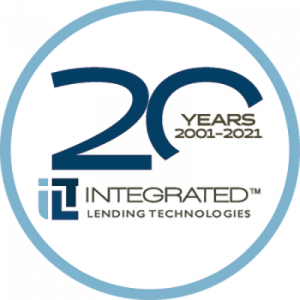 SALT LAKE CITY, UTAH, UNITED STATES, February 26, 2021 /EINPresswire.com/ — Integrated Lending Technologies, LLC (ILT), an industry leader in lending and leasing software, has reached a historic milestone with its 20 year anniversary. Starting with the acquisition of Dealer Indirect Lending and Leasing System (DILLS™) in 2001, ILT broke new ground in automating the indirect lending process. In response to both the changing industry landscape and client demands for versatility and additional functionality, ILT launched the Allegro™ Lending Suite, a cloud based loan origination system with expanded lending and leasing capabilities for direct, indirect and lifestyle lending in 2017. In October 2019 ILT completed conversion of all users from the legacy DILLS™ system to the new Allegro™ Lending Suite.

Regarding this milestone, President and CEO Will McGregor, who has been with ILT since its inception, said, “When we released the first version of DILLS™ in 2001, using the Internet as a way to manage indirect lending was a new idea. But we were confident and determined to make DILLS™ the standard in innovation, flexibility and ease of use. Twenty years later we’re more confident and dedicated than ever to retaining our position as the industry leader by adding even more functionality and configurability to Allegro™ to meet the particular demands of every lending situation.”

In celebration of this achievement, ILT released a new logo to commemorate the company’s journey.