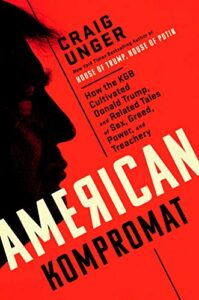 Craig Unger, who gave us the important books House of Bush, House of Saud and The Fall of the House of Bush, once again delivers with American Kompromat: How the KGB Cultivated Donald Trump, and Related Tales of Sex, Greed, Power, and Treachery. As the book’s sub-title explains, this is an exploration into an issue that has been widely discussed, but not well understood or documented over the last five years, namely the true nature of Donald Trump’s relationship with Russia, and before that, the Soviet Union.

Ungar probes the matter deeply, speaking with former KBG officers and others who claim to have been personally involved in cultivating Trump as a contact for the KGB as far back as the 1970s. While it is impossible to prove that Trump was and probably still is a Russian intelligence asset, Ungar does a good job of making the case. Indeed, the entire book is meant to serve as the counter-intelligence investigation that was promised by the Mueller report, but which failed to materialize. Among many useful aspects of this book, #American Kompromat provides a detailed retelling of that particular disappointment and highlights the role that Attorney General William Barr played in lying to the American public about Mueller’s work.

This book also introduces Americans to the idea of kompromat, which is Russian for “compromised.” Ungar explains how the KGB and its successor entity, the FSB, seek evidence of embarrassing or criminal behavior among potential intelligence assets—the better to blackmail them into doing the bidding of the Russian intelligence services.

As for Trump, though the book circles the subject repeatedly, Ungar cannot quite pin down exactly what it is that the Russian have on the man. At one level, as he explains, it’s obvious: Trump was involved in laundering over a billion dollars in illegal money from the Russian mafia. So, as he puts it, “They own him.” But, do they? As Ungar describes, what Trump did with those condo sales to shell companies that may or may not have been owned by Russian gangsters, is perfectly legal.

The bigger question Ungar begs is what could possibly be embarrassing to Donald Trump, a man who does not possess a normal sense of shame? It’s not likely to be a sexual issue. Nor would financial shenanigans be much of a blackmail subject for Trump—certainly not something that happened 40 years ago.

Ungar focuses intently on what he believes is the seminal event in Trump’s recruitment by the KGB. As he was building the Grand Hyatt in New York in the late 1970s, Trump, for some mysterious reason, decided to buy hundreds of televisions for the hotel from an obscure, Russian-owned electronics shop on 23rd street in Manhattan. This shop was owned by a Russian émigré who was known to the FBI as a “spotter agent” who saw potential in Trump and referred him to the KGB station in New York. The KGB then cultivated Trump, inviting him on a lavish trip to Russia, flattering him and encouraging him to share their talking points on nuclear war and strategic alliances.

Susceptible to flattery, Trump took out a full-page ad in The New York Times advocating for Japan to “pay its own way” in defense, a position he continues to assert to this day. According to Ungar, this was a huge success for the KGB, as they had their message being printed in a major American paper. The rest, as we well know now, involves Trump repeatedly restating Russian talking points, siding with Russia against the USA and granting strategic favors to Russia, such as by withdrawing American forces from Syria. As Ungar reveals, Trump is certainly acting like an intelligence asset.

However, there is still something missing here. It may not be fair to lay this at Ungar’s feet, but it is not clear what would actually compel Trump to act this way. Ungar is a journalist, so he doesn’t speculate on what he cannot corroborate. However, Trump’s money laundering is legal. Any sexual indiscretions would be celebrated by his followers. What do they have on him?

The television purchase is a possible hint. If you know how the mafia works, it’s more likely that they already had something on Trump, thus forcing him to buy TVs from a Russian mob-connected vendor, rather than a regular TV wholesaler. That’s how the mob works: when they own you, you buy from them. Ask any New York restaurateur who is forced to buy liquor and table clothes from mob owned companies.

Along the way, Ungar delves into the stories of Robert Maxwell, his daughter Ghislaine Maxwell and Jeffrey Epstein. The book is not able to complete the circle, linking Epstein to Trump and the Russians. Yet, what he does convey is still pretty shocking: When Epstein was arrested in 2005 on charges of soliciting a minor for sex, his alleged treasure trove of videos of powerful men having sex with young girls got into the hands of the Palm Beach Sherriff’s department… where it seems to have made its way to Russia, the law firm of Kirkland and Ellis (Bill Barr’s firm) and other entities would love the blackmail fodder it provides. The implication is that, with Epstein’s materials, Russia was in a position to blackmail anyone who opposed Trump. This could explain the odd loyalty to Trump expressed by any number of otherwise sensible people.

The book also goes into rather lengthy tangents about Bill Barr and the Opus Dei Catholic organization, which apparently influences a lot of policy in Washington, under the radar. According to Ungar, Barr’s embrace of the Unitary Executive theory is in the service of enacting Opus Dei’s Catholic brand of authoritarianism in the US. This reads more or less like a separate book, but it’s definitely interesting. Barr comes off as someone who opportunistically uses Trump’s popularity to advance his Catholic autocratic agenda. This includes protecting Trump from the Russia investigation.