Congress is now moving to implement some of the recommendations contained in the Cyberspace Solarium Commission Report, which was released earlier this year. The 122-page report was impressive in its thoroughness. When it made its debut in March, it was not clear which, if any of its many ideas would become realities. 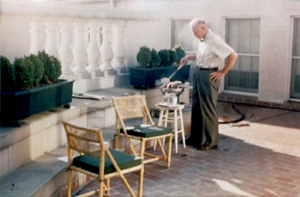 President Dwight Eisenhower cooking at the barbecue outside the White House Solarium. According to legend, he made lunch for the nuclear war experts working inside the Solarium. (Source: White House Museum)

Indeed, the report appeared at an inauspicious moment. The release coincided with the onset of COVID-19 pandemic. The seriousness of the report also stood in contrast to the unpredictable and often contemptuous stance the administration had taken about government regulation in general. The “solarium” reference in the report’s title seemed almost ironic. It was an allusion to the Eisenhower-era conclave of nuclear war strategists who met secretly in the White House’s solarium—serious men who plotted America’s course in a time of grave national peril.

We are not in that kind of administration today. To be fair, though, cybersecurity policy has advanced under the Trump White House, perhaps despite a lack of direct interest from the executive himself. Cybersecurity is neither sexy nor controversial, so experts can work quietly on policies that make sense—without having to worry too much about smear campaigns, cynical news leaks and various other staples of Washington dysfunction.

The recommendations and industry reactions

The House and Senate have gone to work and produced somewhat different sets of recommendations based on the report. They are part of the massive, annual National Defense Authorization Act (NDAA). The recommendations will now be subject to the conference process, so the final NDAA will probably include some of the original House and Senate proposals.

A summary of the House and Senate bills is included below. The House amendments are mostly structural. They focus on strengthening the Cybersecurity and Infrastructure Security Agency (CISA) and appointing a National Cyber Director. The Senate’s proposals are more expansive, with an emphasis on military cyber security. It is gratifying to see them pay attention to cyber weaknesses in American weapons systems. This is a serious issue that needed remediation.

Industry response has been enthusiastic, with Michael Daly, Chief Technology Officer of Raytheon Intelligence & Space, for example, commenting, “The House amendments address some of the most important recommendations of the Commission Report, predominantly focused in the area of strengthening cybersecurity governance.”

“This empowers the Cybersecurity and Infrastructure Security Agency with leadership and authorities, and calls for the creation of risk management agencies. This is a huge win for our national cyber security.” – Michael Daly, Chief Technology Officer of Raytheon Intelligence & Space

In particular, Daly was pleased with the proposed creation of an Office of the National Cyber Director. He said, “This empowers the Cybersecurity and Infrastructure Security Agency with leadership and authorities, and calls for the creation of risk management agencies. This is a huge win for our national cyber security.” Tom Kellermann, head of cybersecurity strategy at VMware Carbon Black, felt that “the strategic opportunities for action delineated within their thoughtful report lay out a holistic strategy for civilizing American cyberspace and actively disrupting the cyber insurgency that our adversaries have stoked.”

“The strategic opportunities for action delineated within their thoughtful report lay out a holistic strategy for civilizing American cyberspace and actively disrupting the cyber insurgency that our adversaries have stoked.” – Tom Kellermann, head of cybersecurity strategy at VMware Carbon Black

Still more work to do

Industry leaders, while pleased with the Congressional moves, still feel there is more work to do to realize the vision of the Solarium Commission. Andrew Howard, CEO at Kudelski Security, noted, “Ultimately, these recommendations are just a first step and, frankly, more will be needed. This report puts a lot of emphasis on product vulnerabilities, rightly so. Additional emphasis by companies on layered security and rigorous testing is needed.” For instance, Howard would like to see rules mandating vendors to continue security patches as long as they support a product.

“Ultimately, these recommendations are just a first step and, frankly, more will be needed.” – Andrew Howard, CEO at Kudelski Security

Michael Daly felt that there were two areas that could be enhanced by adding legislative proposals to the NDAA. One is to improve the accurate and timely attribution of cyber incidents. The other is to authorize funding for the Cybersecurity Moonshot. This proposal would require the Department of Commerce to establish national cybersecurity grand challenges to achieve high-priority breakthroughs in cybersecurity. In Daly’s view, the Moonshot is “particularly crucial, because it is a mechanism for laying the foundation for continuous improvement and engaging the whole-of-nation in strengthening our cybersecurity posture and our economy.”

Tom Kellermann had two additional proposals of his own, which align with testimony he gave in front of the House Finance Sub-Committee in June. He suggests that the government create a tax incentive for companies that dedicate at least 10 percent of their IT budgets towards cybersecurity and comply with the NIST Cyber Security Framework. He would also like to see a modernization of anti-money laundering and forfeiture regulations to empower the government to seize the virtual currencies and digital payments which are used in cybercrime conspiracies.

The US is at least two steps away from seeing much real impact from the Solarium Commission. First, the House and Senate bills must go through conference. Whatever emerges from that process will then be subject to implementation by various agencies in the executive branch. The good news is that the proposals don’t appear to be very expensive. They are low-voltage, common sense ideas that should not be too controversial. However, they do deal with bureaucratic structure and people, so it’s possible they’ll get bogged down in in-fighting and “slow walking” sorts of traps.

The next few months will be interesting.

House of Representatives Solarium-related amendments to the FY21 NDAA

Senate bill details for cybersecurity in the FY21 NDAA

chain on matters relating to cybersecurity

Previous: After Florida was hacked in 2016 election, state got millions for election security. Here’s how it was spent
Next: Pulse Secure NAC Extends Zero Trust Network Assurance as Users, Endpoints and IoT Devices Return to a Hybrid Workplace