Home » Books and Reviews » Featured » Book Review: “Manipulated: Inside the Cyberwar to Hijack Elections and Distort the Truth”

Manipulated: Inside the Cyber War to Hijack Elections and Distort the Truth, by Theresa Payton, takes on what is arguably the most important issue facing Americans today: the global digital war on democracy being waged by our geopolitical adversaries. Indeed, as she explains, most of the world is threatened by cyber election meddling. 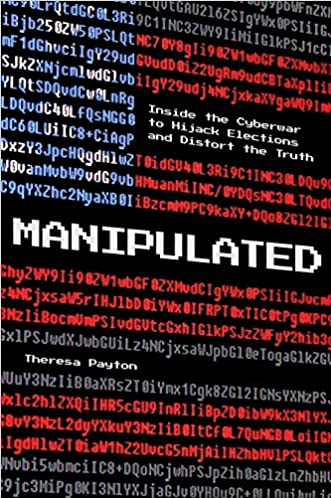 The basic story is familiar to people who follow the news. Russian and Chinese state actors, along with cyberwar units in Iran and elsewhere, are using highly sophisticated digital technologies to shift American public opinion and even hack the election infrastructure itself. What Payton does so skillfully in the book, though, is to flesh out the frightening reality of America’s true vulnerability to foreign manipulation of its political process.

Payton comes to this task with strong credentials. She was the first woman to serve as White House CIO, under President George W. Bush. Now, Payton is CEO of Fortalice Solutions, a cybersecurity and intelligence services firm. She brings an experienced eye to a subject that can be overwhelming and bewildering to most Americans.

The book lays out the depth and breadth of the threats the country is facing. She chronicles the many different ways that Russia and China are pushing false narratives on social media and infusing the American news ecosystem with distracting stories aimed at advanced their preferred candidates for office—or, in some cases, favoring their geopolitical agendas.

Payton then probes several underlying issues that are necessary to understanding what’s going on. She discusses how Americans have difficulty determining which stories are true and which are fake. The pace and volume of digital news and the trust-based nature of social media groups make it hard for most people to spot a fake story planted by the GRU.

She then gets into the technological aspects of this phenomenon, and again, the news is not encouraging. Our adversaries are getting strong and more sophisticated, with deep fake videos, fake social media personas and more. Payton examines the immense hacking and trolling infrastructure that Russia and China can bring to bear on American politics.

The book digs into the motivations that authoritarian countries like Russia, China and Iran have for poisoning democratic governments in the US, UK and elsewhere. It has to do with their regimes clinging to their own power. They don’t want their people pining away for American-style democratic rights. So, they conspire to make American democracy look like a sham.

She is also not shy about pointing the finger at our own country. The US is notorious for election meddling. We’re shocked to have it happening to us, but if you live in Central America, for example, you will be quite familiar with the US barging in and distorting your political process for its regional strategies.

As she explains, election meddling is nothing new. Interfering in the internal affairs of other states has been going on since ancient times, as she points out. However, digital technology makes things different. Lies can spread so much faster. The public is so deluged with stories, it cannot keep up.

Payton concludes the book with suggestions on what the government and individuals can do to mitigate the impact of these brazen foreign attempts at manipulation. She encourages people to check their sources and become savvier about what she calls “The manipulator’s playbook.” Tech companies need to step up. Congress needs to strengthen laws about cyber fraud, and so forth.

Having read several books on the themes of foreign cyber war against the US, I experienced a familiar sense of dread after finishing Manipulated. The threats are potent. The proposed solutions are optimistic but perhaps a bit naïve. One gets the sinking feeling that, like the digital lies that move at the speed of light, the threats attempting to destroy our democracy can move a lost faster than any potential solution. We may be dealing with the effects of the attacks way before we have a workable answer—and by then, the damage will be done.

Of course, the problem may ease back into a more manageable state in the next few years. Payton doesn’t say this, because she’s polite and a professional, but one of the main reasons the manipulation is so problematic today is because it appears that the White House itself is in on it. For sure, the administration and its allies are willfully promoting Russian propaganda they know to be false because it helps further their political agenda. Perhaps, on a different day in the near future, both political parties will look askance at foreign interference and join forces to defeat it.