NEW YORK—June 18, 2020—A new book, Digital Downfall: Technology, Cyberattacks and the End of the American Republic, reveals how Russian and Chinese cyberattacks and digital influence campaigns have aggravated the already destabilizing effects of the COVID 19 pandemic and anti-police protests. Written by Hugh Taylor, Editor of The Journal of Cyber Policy, the book offers an analysis of the national security problems arising from America’s reliance on insecure technology to run virtually every aspect of its government and society. 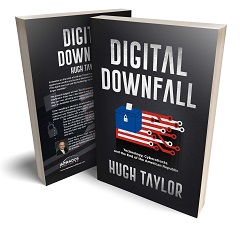 “The US is more vulnerable to destructive foreign interference today than it has been in over a century,” said Taylor. “Russia and China realize they can’t win shooting wars against the US, so they’re using digital technology to inflame existing divisions in our society to weaken us and distract us from their own aggressive geopolitical agendas.”

The book uses data about cyberattacks and known weaknesses in US technology infrastructure to build risk scenarios. The author posits that multi-faceted cyber and disinformation attacks could trigger unparalleled chaos and disruption in the US. As Taylor noted, his scenarios are coming true sooner than he might have guessed. “Events that seemed paranoid, even loony to predict when I was writing the book six months ago now seem painfully prescient.”

“Software bots accounted for nearly half the tweets encouraging armed men to threaten elected officials with death in protests over COVID-19 lockdowns,” Taylor explained. “We don’t know who created these bots. They could be from Russia, China or the USA. However, the fact that we can’t figure this out reveals the depth of the problem, from a national security perspective. We are nearing a state of armed insurrection and we don’t know who gave the order to make it start.”

The book takes an unsparing look at the consequences of using inherently insecure computers and networks to power American industry, government, telecommunications, military and news media. It assesses Russian and Chinese cyber campaigns against the US, which they refer to as “Hybrid Warfare” and “Unrestricted Warfare” respectively. Taylor also investigates the power of digital technology to distort the truth and harden public opinion in favor of ideas that bear little relationship to reality—but which serve the needs of America’s enemies.

Digital Downfall takes on uncomfortable topics, such as Russia’s willingness to pit American racial groups against one another to foment violent instability. “Polite Americans don’t want to talk about such touchy subjects, but Russia has no problem ‘going there,’ so to speak. The Russian military doesn’t have to eat Thanksgiving at your house this year. They’re delighted to trigger hate-fueled violence using fake Facebook groups if that will keep us from focusing on their illegal war in the Ukraine.”

Ultimately, the book asks the reader to consider if the US is on the brink of civil war. It looks at how cyber meddling in elections, disinformation campaigns and abuse of social media are widening racial and political divides in the US. It also examines the vulnerability of the American military, along with the US economy, as further risk factors.

Taylor has been working in the enterprise technology and cybersecurity fields for over 20 years, earning a Certified Information Security Manager (CISM) credential in the process. He writes extensively about cybersecurity, software design, data management, cloud computing and enterprise information technology (IT).