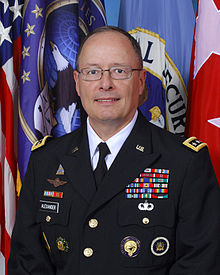 New board to aid cyber, cloud and enterprise security firm in pursuit of strategic objectives

Ashburn, VA – May 20, 2020 – Telos® Corporation, a leading provider of cyber, cloud and enterprise security solutions for the world’s most security-conscious organizations, today announced that it has added four-star Army general and the first commander of USCYBERCOM, General (Ret) Keith Alexander, as the inaugural member of its advisory board. General Alexander will serve as a strategic partner and provide counsel on key cybersecurity objectives and initiatives.

“General Alexander is one of the foremost authorities on cybersecurity in the world, and we are thrilled to welcome him as the first member of our Advisory Board,” said John B. Wood, CEO and chairman, Telos. “I have no doubt that we will benefit greatly from General Alexander’s vision and innovative approach to cybersecurity and look forward to a fruitful partnership.”

General Alexander is the Founder and Co-CEO of IronNet Cybersecurity, a global cybersecurity leader that is revolutionizing how organizations secure their networks by delivering the first-ever Collective Defense platform allowing real-time threat intelligence sharing.  General Alexander previously served as director of the National Security Agency, chief of the Central Security Service and commander of the United States Cyber Command, where he led DoD agencies during the conflicts in Afghanistan and Iraq at a time when cyber attacks against the U.S. were on the rise.

“The threat landscape continues to evolve and innovative companies like Telos are critical to turning the tide in the cyber war,” said General Alexander. “I’m honored to lend my insight to such a well-respected, impactful organization.”

Telos Corporation empowers and protects the world’s most security-conscious organizations with solutions for continuous security assurance of individuals, systems, and information. Telos’ offerings include cybersecurity solutions for IT risk management and information security; cloud security solutions to protect cloud-based assets and enable continuous compliance with industry and government security standards; and enterprise security solutions to ensure that personnel can work and collaborate securely and productively. The company serves military, intelligence and civilian agencies of the federal government, allied nations and commercial organizations around the world.  The company is a recipient of the prestigious James S. Cogswell Outstanding Industrial Security Achievement Award from the Defense Security Service (DSS), awarded to less than .03% of eligible organizations. For more information, visit www.telos.com and follow the company on Twitter @TelosNews.

Previous: Phishing in The Time of Pandemic
Next: Nearly 70% of major companies will increase cybersecurity spending post-coronavirus