“Security and development leaders want high speed and secure DevOps and digital transformation. A core principle of going fast is finding and fixing important functionality and security flaws early,” said Alan P. Naumann, Chairman of the Board, President, and CEO of Contrast Security. “With Route Intelligence, which is now part of Contrast Assess, our customers can immediately see a comprehensive picture of the entire application attack surface, allowing overstretched development teams to save time and focus their valuable resources. In addition, development and security teams can work from a shared and accurate view, saving hundreds of hours required for vulnerability remediation verification. Route Intelligence is one more game-changer in the application security revolution that Contrast Security is spearheading.”

Better Visibility. Because of the discovery approach employed by Contrast Assess, developers have a full and complete picture of their entire application attack surface, how much of it has been tested, and what areas require remediation based on identified vulnerabilities. This virtually eliminates vulnerability risk associated with the deployment of compromised application code.

Additional Automation. Traditional SAST and DAST tools try to solve the problem of coverage and verification of remediation using different techniques but are highly ineffective. Their findings are also extremely inaccurate and peppered with false positives, turning vulnerability verification into a game of Whack-A-Mole. Static scans no longer reflect the true nature of an application’s security posture, as more and more of the application is being loaded dynamically at runtime. By utilizing the application’s runtime behavior, Route Intelligence enables users of Contrast Assess to compare successive security assessment results for each application route to ensure that the vulnerability originally discovered on a route is no longer present. This automated vulnerability remediation verification approach dramatically improves application risk posture while giving back hundreds of hours to development and security teams. 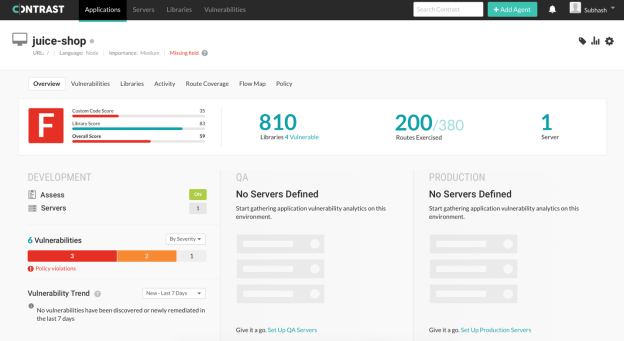 “Our research shows growing interest on the part of security teams to automate application vulnerability discovery and verification of remediation at development speed,” said Doug Cahill, VP and Group Director of Cybersecurity at ESG. “Transparent visibility across the entire application development and runtime attack surface is a critical linchpin for organizations seeking to manage risk effectively.”

Route Intelligence is currently available to customers of Contrast Assess. Development teams seeking to identify undiscovered vulnerabilities across their application attack surface and to determine how much time they can save in verifying vulnerability remediation can schedule a demo of Contrast Assess and its new Route Intelligence technology atcontrastsecurity.com/demo.

Contrast Security is the world’s leading provider of security technology that enables software applications to protect themselves against cyberattacks, heralding the new era of self-protecting software. Contrast’s patented deep security instrumentation is the breakthrough technology that enables highly accurate assessment and always-on protection of an entire application portfolio, without disruptive scanning or expensive security experts. Only Contrast has sensors that work actively inside applications to uncover vulnerabilities, prevent data breaches, and secure the entire enterprise from development to operations, to production. More information can be found at www.contrastsecurity.com or by following Contrast on Twitter at @ContrastSec.