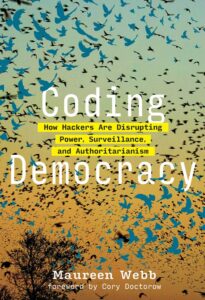 Coding Democracy: How Hackers are Disrupting Power, Surveillance and Authoritarianism

Coding Democracy is an ambitious book that takes on a sprawling, important subject: the use of hacking to advocate for democracy and human rights in a time of increasing surveillance and anti-democratic government. Webb digs deeply into the history of the political hacking movement and the hacker culture and “hacker ethic” that propels groups like Anonymous and Germany’s Chaos Computer Club (CCC), which she covers in depth.

She establishes the clear connection between the 1960s politics of the left and the Haight-Ashbury counter-culture and the growth of hacking. Indeed, as she deftly explains, the very architecture of the Internet and much of today’s computing stack is inextricably bound up with ideals of freedom of information, personal rights and free software. In this context, the book discusses the origins, beliefs and activities of the “Cyperpunks” and comparable groups.

The book offers several clear descriptions of issues that can be amorphous and difficult to parse when discussed by lesser scholars. One of the main themes here is the quest for “transparency for the powerful; privacy for the weak.” This is a guiding principle for much of the pro-democracy hacker world. Thus, the Panama Papers are a way to make the activities of the powerful known to the public and anonymous document drops like those on The Intercept, provide privacy for those who challenge the power structure – at least in theory.

As she points out, the difficulty that arises with any principle like this are the details of how it’s actually executed. Who decides what should be public and what should be private? Should a teenage anarchist have this kind of power?

Coding Democracy is a thorough, well-written work of scholarship that should be seen as a welcome addition to a growing body of work about the relationship between computing, society and government. A lawyer, Webb is able to weave the hacker narrative into various strands of thought relating to political science, history, legislation, law enforcement, regulations, civil law, politics and ethics. In one fascinating tangent, she explores how the American revolution and the US Constitution informs the hacker ethic worldwide.

This is not a work of hagiography about hackers, but it’s clear that Webb is very enamored with the potential for code to change the world for the better. I am not so sanguine about this, and I have to confess that I am not the right reader for this book. I don’t find 1960s counterculture endlessly uplifting. I was, as a recent essay in the Washington Post poignantly put it, a child in the 1960s, not a child of the 60s.

I am The Man, a corporate fascist pig/narc/suit/square/cis-straight-Caucasian. I spent my childhood being browbeaten by self-important hippy know-it-alls, people who told me, for instance, that joining the Cub Scouts was the moral equivalent of napalming Vietnamese babies… the same privileged white people who screamed at me endlessly in college for my reprehensible whiteness. I don’t find their hacker ethic very inspiring. I find it tedious, self-absorbed and dangerously naïve.

As Webb herself points out, many of the “information must be free” ideals that shaped modern technology have made it insecure and enable bad actors to do real harm. Bitcoin, for example, which was envisioned as the sort of stateless money that would free humanity from the power of big banks, has turned into cesspool of corruption, wealth hoarding and crime. This book references so many manifestos that I became interested in writing my own manifesto – a call to arms for grown ups to force the hippy know-it-alls to confront the unintended consequences of their frequently ill-advised passion for tech freedom, but I digress…

At the same time, the pro-democracy hackers are engaging in significant, relevant fights. The battle over encryption in personal devices is one example she covers. Should Apple cave in to government demands for a “back door” into iOS? Webb’s hacker friends and organizations like the Electronic Frontier Foundation say no, and I agree with them. I don’t want Bill Barr poring over my emails, or anyone else’s.

Not all fights are so critical, though. Webb recounts many examples of what seem, at least to me, like force 5 tempests in microscopic teapots. Maybe it’s just me, but the warfare being waged online about whether you can reprogram your phone is, as Esquire’s Charles Pierce might call it, “So much inside baseball wankery.” How many people really need this, or even know about it?

As Webb further explores, not great things can transpire when people take it upon themselves to right injustices without having the intellect or moral compass required for such heady missions. Julian Assange provides a cautionary tale. He was very much of this group, but his willing, or unforgivably naïve cooption by Russian intelligence services helped deliver the Trump presidency.

Webb does point out that code alone will not make the world more democratic. She contrasts the Occupy Wall Street movement, which was partly hacker-driven, and its symbolic but more or less empty victory with a similar, but successful campaign in Barcelona, Spain. The Spanish campaign blended hacking with methodical political organizing. It resulted in tangible results: the jailing of a corrupt banker and the election of a reform-oriented mayor of the city. This is disappointing, because, like so many Americans, I wanted crooked Wall Street bankers to face accountability for their recklessness and fraud in 2007, but the Occupy movement was so comically inept and high on its own supply, it went nowhere.

By the end of the book, I felt as if I had learned a lot. A certain amount of the material went over my head. I’m not well-versed in advanced political theory. However, I couldn’t shake the feeling that although a lot of smart people are coding for democracy, democracy is still losing. Anti-democracy has some awfully good coders, too.

Postscript: I shared a draft of this review with the author. This was her note:

Code, more than law, will soon determine the kind of societies we live in, and whether they end up resembling democracies at all. But while code is shaping the future, it is incomprehensible to most people. Computer users, for the most part, are at the mercy of the code makers.

Who controls code?  A fierce struggle is taking place as corporations, states, criminal elements, and parts of civil society vie to build the coded world around us. Hackers are savants in this world. Sought after for their talents, almost folkloric in status, they’ve been recruited and reviled, celebrated and thrown into prison.

In the digital revolution that has so speedily enfeebled our democracies, Coding Democracy shows how hackers might ultimately be vital disruptors – and how “hacking” has become an ethos for a growing social movement in which ordinary citizens are taking things into their own hands when reform seems out of sight. At a time when faith in elites to govern has never been lower, hacking is inspiring a new wave of activism, a new way of thinking and acting. People are hacking, not just privacy and transparency, but business, law, property, banking, money, politics, electoral processes and democratic decision-making itself. Literally and metaphorically, they are striving to “code in” democratic outcomes where they can. This is not tech utopianism, but rather an urgently needed “upgrade” of democracy for the digital age.