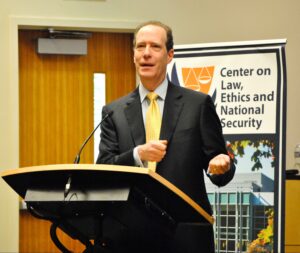 Glenn Gerstell, former General Counsel of the NSA, speaking at Duke University in 2017

Glenn Gerstell asked his keynote audience at the Cloud Security Alliance conference to think about NASA astronaut Christina Koch, who landed in Kazakhstan three weeks ago after a record-breaking 11 months in orbit. For Gerstell, former General Counsel of the NSA, NASA’s reliance on Russia, a geopolitical adversary, is a telling aspect of our new digital reality.

New, American-made solutions from Boeing and SpaceX are about to come online so the US is no longer shuttling its astronauts around in Soyuz capsules. However, by contrasting today’s US-Russia space relationship with that of the Apollo era, Gerstell was able to pose an important: how much technology research should the US government be expected to undertake, versus the private sector?

Certainly, as Gerstell sees it, the global technological/geopolitical environment demands that the public and private sectors come together to confront unprecedented challenges. For example, he noted that tech is not constrained by national boundaries. Indeed, digital spies can cross national borders at will with little risk of consequences. He also underscored that, given how technology advantage requires neither a great deal of capital nor natural resources, a country like the US can no longer rely on its size and wealth for a built-in edge.

This insight brought Gerstell to the main theme of his talk: China’s rise and the potentially serious implications for the US if we cannot react effectively, or in time. It’s not a simple issue, and Gertstell clearly brings a wealth of experience to the analysis of the complex, inter-dependent relationship between the two countries.

Gerstell related how China’s remarkable economic growth and technological prowess has come, at least in part, through a massive act of theft. China has plundered American academic institutions and corporations for trade secrets and proprietary data—enabling it to leap ahead in fields like genomics, quantum computing and advanced materials. As he put it, this trend may have profound effects on the America’s economy, national security and very way of life.

Where is the US/China relationship (or conflict) headed? Gerstell had two significant points to make in answering this question. First, Americans should not assume that they will continue to dominate the world economically and geopolitically just because it has been that way for a generation. China might easily overtake the US economically and militarily, and soon.

Combined with the effects China’s massive investments in its Belt and Road Initiative and comparable projects, the US could find itself playing by China’s rules on a global basis. This could be a highly unwelcome turn of events for Americans, who have lived for nearly a century in an atmosphere of isolated privilege and power.

What should be done about this challenge? According to Gerstell, the solution resides to a great extent in how well the US can recalibrate the responsibilities of the government and the private sector in keeping America at the technology forefront. As the Boeing/SpaceX example suggests, we are not going to return to the 1960s, when the federal government took the initiative to develop the aerospace, materials and electronics needed for global technology leadership.

The private sector, in which Gerstell includes academia and non-profit organizations, will have to shoulder the burden—but with government support. This does not seem to be so much a policy preference as simply a cold assessment of reality. Technology is moving too rapidly for any alternative to be viable. To underscore this point, Gerstell discussed the impact of foreign cyberattacks on private corporations. The government has a responsibility to protect Americans in this context, but it cannot do everything. Even if it wanted to, it simply can’t. Private industry must step up and be part of the solution.