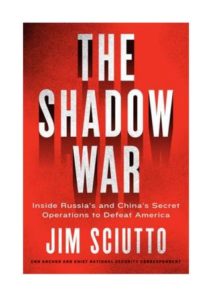 The Shadow War: Inside Russia’s and China’s Secret Operations to Defeat America, by Jim Sciutto, is arguably the most important book of the year, if not the decade. As a CNN anchor and the network’s Chief National Security Correspondent, Sciutto has the kind of high-level access—and perspective—to see the big picture regarding threats to the United States. He doesn’t waste any time in sounding the alarm about the risks this country faces from two determined, well-organized and effective geopolitical adversaries.

Without resorting to hype or histrionics, Sciutto takes the reader through Russia’s long history of disruption campaigns aimed at weakening other nations. He then methodically explores China’s relentless, incremental drive to steal America’s technology advantage and push the US out of what it considers its sphere of influence in the Western Pacific.

Without resorting to hype or histrionics, Sciutto takes the reader through Russia’s long history of disruption campaigns aimed at weakening other nations.

He explains the “win without fighting” ethos of this asymmetrical form of warfare. And yes, as he describes, the US is at war. It’s just a war that US leadership can’t quite see or admit is happening. Sciutto is respectfully critical of the lackluster responses of both the Obama and Trump administrations in responding to increasingly brazen attacks.

This book is only partly about cyberthreats, though it goes into depth on Russia and China’s cyber campaigns. In the case of Russia, he covers election interference and comparable disruptions. Sciutto shares the little-known (at least here) Russian cyberattack on Estonia in 2007. The events in Tallinn provide an eerie foreshadowing of exactly what we’re going through today. The only difference is the technology, which is now radically more advanced and harder to stop.

…arguably the most important book of the year, if not the decade

Sciutto probes the matter of China’s theft of digital design plans for the Boeing C-17 and Lockheed F-35 fighter. He’s willing to call out what he sees as aggressive, destructive espionage. In so doing, he’s implicitly negating the suspicious minimizing of this story by the US government.

Shadow War then outlines the military actions of Russia, and especially China that comprise the strategic elements of the conflict. He goes in a submarine under the Arctic ice, where Russia is staging its next moves. He flies with the US Navy in a spy plane over disputed man-made islands in the South China Sea. He takes a hard look at US vulnerabilities in space.

He deftly explains, our adversaries are pushing matters right to the edge of actual combat.

In each case, as he deftly explains, our adversaries are pushing matters right to the edge of actual combat. In so doing, they appear to press the US into a position where it can either respond with force or pull back. As he shows, the US has pulled back, either out of a desire to avoid a catastrophic incident, a misreading of the situation or from trusting enemies who have not acted in any way that earns such trust.

He concludes the book with a number of thoughtful policy suggestions that could put the US on a firmer footing to fight the shadow war without igniting a real global war. None of them will be easy to implement, but I agree with the author’s assertion that they are essential to avoid defeat in this new, perplexing form of international conflict.

Previous: Threat to US elections not limited to Russia in 2020
Next: Parks Associates: 71% of US Broadband Households with Smart Home Devices Concerned About Cybersecurity