Home » Articles and Opinion » Featured » From NordVPN: Younger Children Are Using Digital Devices More Than Ever Before

A study from Ofcom about children’s media usage revealed that parents are getting more and more concerned about the internet. At the same time, younger kids are spending more time than ever on digital devices because of their accessibility. 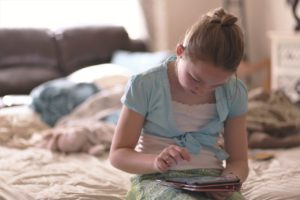 In general, the older the children get, the more they use and interact with media devices and services. Increasingly, the group of 12-15s goes online for the longest time per week. They choose the most ‘over the top’ TV services like Netflix, Now TV, or Amazon Prime Video or a video-sharing website YouTube, and have a social media profile. Also, preschoolers of age 3-4 are spending more time on tablets.

“The number of younger kids using electronic devices connected to the internet is growing at a rapid pace. This means that more people could become victims of cyber attacks or face other threats, such as cyberbullying or offensive content. Thus, parents should become more aware of their children’s activities online and start educating them as early as possible,” says Daniel Markuson, a digital privacy expert at NordVPN.

Compared to the previous year, content created by vloggers was more popular than ever among kids aged 3-15. Such content was also seen as a source of inspiration for creativity. Many of the interviewees upload content both to YouTube and Musical.ly, and it often mimics other popular YouTubers. Also, the rising vloggers’ popularity may be responsible for the increasing pressure to spend money online. Although kids understand that their favorite YouTubers get paid for product endorsement, this doesn’t stop them from buying promoted things.

Considering parental worries, the greatest one is “companies collecting information about what their kid is doing online.” Through the year, three other issues raised more concern: the child damaging their reputation, the pressure on the child to spend money online, and the possibility of the child becoming radicalized online.

Despite rising concerns, parents are sometimes less likely to restrict their child’s activities. In contrast with 2017, in 2018, children aged 12-15 were less likely to say they had received information or advice from their parents or guardians. Some of the parents thought that their kids were using common-sense while interacting online. Others believed that safe internet usage was taught in schools already.

NordVPN recommends that parents spend more time talking to their children about the threats in the digital world. “Cybersecurity education should start at an early age when guardians are still authorities. Limiting certain online activities is often not the best choice. Instead, one should try to explain to their children how important digital reputation, fact-checking, online etiquette, and safety are and how online advertising works. Being open and supportive will gain the child’s trust. Most importantly, a parent or guardian should set the best example they can,” explains Daniel Markuson.

The study ‘Children and parents: Media use and attitudes report 2018’ was released in February 2019.

Photo by Drew Rae from Pexels