Richie Etwaru, the technology and data ethicist and socio-economic historian, announced recently that he co-launched Hu-manity.co, an app that focuses on human data and the right to own your data as property.  What inspired him to co-launch the app? Richie remembers the day he first gave up control of his digital self for potentially unethical mass manipulation. On that day, he promptly scrolled to the bottom and clicked the button that read, “I Accept.”

As he put it, “As individuals, whenever we sign up for new subscriptions, we should not be required to do battle with powerful corporations. That’s why the establishment of the 31st Human Right is so important, and why my colleagues and I are fighting for it every day.” 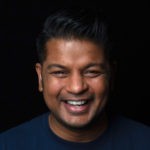 Asked, “What needs to change so we can own our own data?” Etwaru replied, “The immediate opportunity is to address the two central issues of data privacy and data ownership. But these are foundational issues, not deep solutions. Making progress on data privacy and data ownership in the next five to ten years will be equivalent to piling up sandbags as the floodwaters rise. You may avoid drowning this time, but again and again the water will keep coming.”

Etwaru cited Dr. Yuval Harari, who describes this threat as “the domestication of the human species.” With unregulated siphoning of our data, corporations and their algorithms will know us better than we know ourselves, and this will inevitably lead to the unethical manipulation of the people on a global scale.

He offered an example. “Based on your Snapchat history, an algorithm might know your sexual preference before you know it, allowing marketers to target you with content designed around where they think you are on the gender spectrum. Regardless of whether we believe this would be a good thing or a bad one, such sophisticated targeting will erode our free will and bend the natural course of human self-awareness.”

Warnings aside, Etwaru does see progress in human data ethics. He shared, for example, “Recently, we’ve seen the movement take flight: Seema Verma, the administrator of CMS in the US Federal Government, made public statements that patients own their healthcare data. Governor Newsom of California called for a data dividend; human data property rights has been a hot topic within the media including: FOX Business, NPR and The Washington Post.”

He also said, “The overall problem is enormous, and we can only solve it one issue at a time. Hu-manity.co and the #My31 movement around the 31st Human Right, which calls on the United Nations to ratify the 31st amendment to the Universal Declaration of Human Rights says that everyone has the right to own their inherent human data as their personal property.”

Previous: News Insights: Big Norwegian Aluminum Producer Norsk Hydro Suffers Major Ransomware Attack
Next: Desperate to get through to execs, some cybersecurity vendors are resorting to lies and blackmail