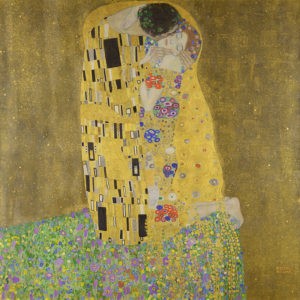 Calling it an enigma, art history experts and cyber security experts alike were completely baffled by the results of an X-radiography study of the famous painting, “The Kiss” (Der Kuss) by Gustav Klimt. “It represents a major tear in the time-space continuum,” said Dr. Elrebe Looc, a physicist at Austria’s Institute of Technology and Science. “But, it is what it is. The nature of our research is to explore things as they are, not as we wish them to be.”

The finding in question concerns the discovery of a previously hidden detail in the painting, viewed by some as the most famous work of art in the world. X-radiography shows that Klimt had created an earlier version of the painting, but then covered over his work in the final presentation. Specifically, the exposed feet of the woman receiving “the kiss” in the image were originally covered by “NSA Cat Sees All” socks similar to the ones handed out by Sophos at the recent Black Hat conference in Las Vegas.

“It seems hard to believe, but perhaps Klimt had some clairvoyant abilities,” said Aras Nuf, a Klimt expert at the University of Southern North Dakota at Hoople. “He was certainly channeling the future. In a way, it makes sense. Klimt was a master of layers, of hiding reality within alternative realities, overlaying the academically suitable art of his era with gold leaf and other craft arts—a bit like the way modern cyber security requires paradoxical layers of defense. What we see is not what it appears to be. That’s Klimt. It’s also cyber security. It all adds up.” 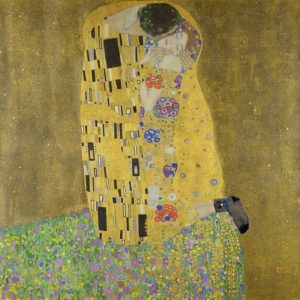 X-radiography reveals that the model for Der Kuss was in fact wearing Sophos “NSA Cat Sees All” socks in the original version of the painting.

“There’s a more down-to-earth explanation,” offered a spokesperson for Sophos. “We do end point protection. Her feet are her endpoints, so to speak. She’s protecting her end points. You could call it the end pointillist style.” 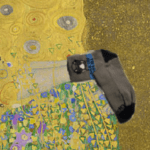